Surrounded by Albania, Greece, Bulgaria, Serbia and Kosovo, North Macedonia is in the middle of the Balkans. Guests can expect a millenary history, with influences of different cultures and a varied landscape with large cities and small villages. And so much is revealed: North Macedonia is always good for a surprise. The country has much to offer its visitors - discover North Macedonia with Air Prishtina.

The settlement of today's North Macedonia dates back before Christ's birth - correspondingly diverse are the cultural and archaeological legacies. Orthodox Christianity and Islam have shaped the area of today's North Macedonia for centuries. Churches and mosques in the immediate vicinity are therefore not rarity in the whole country. Wherever you move, you always meet witnesses of bygone days. You can hardly dig in Ohrid without encountering historic walls and important relics. Various construction sites within the city are still due to archaeological finds.  New vs. old - such contrasts are still visible in many places today. The clearest sign of the boundary between the past and today is probably in Skopje. While the new district has countless monumental new buildings, the Ottoman outlines are still visible and noticeable everywhere in the Old Town, despite the modernization that is taking place here as well. A very exciting combination.

The landscape and nature

North Macedonia is also very varied from a nature perspective.  Wide plains, lovely hilly landscapes, dense forests with bears, wolves and wild boars or mountains with peaks reaching over 2700m. Lake Ohrid is considered one of the oldest lakes in the world and has a large biodiversity, with many of the animal species living here are found only in this body of water. A boat trip on Lake Ohrid not only offers relaxation, but also opens up a new perspective on the naturalness of the waterfront regions. In the plains of the country agriculture is mainly used. Tobacco is grown on extensive green areas as well as corn, cereals, peaches and apricots. The land has several vineyards in which the Vine Mountains nestle against the hills. Most of the growing areas are located along the Vardar River in the center of the country. Also in central North Macedonia, marble is reduced, which is used far beyond the country's borders. The white cuts of the quarries in the mountains are already recognizable from a distance. Many of the most beautiful destinations are accessible from the big cities by day trip. Worthwhile is also, for example, the west of Skopje Matka Canyon with the same reservoir.

Depending on the location, many products are still made today by hand. In the old part of Skopje you can visit some of the factories or watch from the street the craftsmen making their products. In the bazaar, for example, numerous goldsmiths can be found, but also bags, clothes and shoes are here partly still made by hand - from traditional to modern. Who travels to North Macedonia will certainly come into contact with filigree art (silver art and jewelry).  In Ohrid you will notice pearls that you can buy in all sizes. Contrary to the naturally grown pearls, these are made by human-hand. Raw pearls are pulled several times through an emulsion of powdered fish scales.  The recipe for this emulsion is well-guarded, but only the iridescent scales of the plasica fish come into question for the Ohrid pearl. Plastic does not come into consideration for  the traditional manufacturers, in contrast to the copies from the Far East, which can be bought cheaply at the street stalls.

The food in North Macedonia is relatively nutritious as everywhere in the Balkans. A traditional menu starts with a Schopska salad of tomatoes, cucumbers and grated sheep's cheese. Ajvar (paprika mousse), Pindjur (like Ajvar, but slightly coarser and with tomatoes), a garlic cream and olives follow on different plates. Afterwards, there is traditionally meat - beef, lamb or chicken. This is either processed as a stew, or it is fried and baked with cheese. The same applies for the fish. Often bean dishes, eggplant and zucchini, potatoes and French fries are also on the table. Of course, bread should never be missing. As a dessert, you can eat the syrup-soaked Baklava throughout the country. Depending on the region, the dessert may also vary. In Ohrid, for example, the Ohrid cake is often served - a cake with chocolate, caramel and walnuts. Definitely, it is worth to take a look at the wine list in the restaurants. In the various regions of the country there are numerous producers who produce excellent wines. The wineries can also be visited and the wines tasted.

Flight with Germania from Zurich to Ohrid

You will be welcomed by a professional companion and will be sent by bus directly to the hotel****.

Once you're done with the Check-in, you're already in your first exploration tour. You will travel by bus along the Ohrid Lake to St. Naum Monastery. Lake Ohrid is part of the border between North Macedonia and Albania and its one of the oldest and deepest lakes in the world. You will enjoy a typical North Macedonian lunch in an idyllic environment and then visit St. Naum Monastery with its well preserved frescos. After a walk through the maintained monastery complex, the bus leaves to the Bay of Bones. In 1997, divers in this prehistoric settlement found bones left behind, after which this village was rebuilt and can be seen as a museum in the water since 2011. Then return to the hotel, and you will have time to relax before you dine. You will dine right next to the water and if you like, you can end up in one of the city's most popular bars or go back to the hotel.

Today's day is fully booked for the old town of Ohrid. Established in the 6th century under Lychnidos (City of Light), the city has been on the list of UNESCO World Heritage Sites since 1980 - and that's absolutely right. On a walk you will visit the archaeological site in the heart of Plaosnik, the Church of St. Clement and Panteleimon. Raised on the roofs of Ohrid, you can enjoy a wonderful view over the city and Lake Ohrid. Then visit the ancient theater and other excavated places. Ohrid is an archeologically important city and almost everywhere you dig, you can find antique remains. You also visit a small workshop where the paper is produced exactly as it was produced in the 2nd century BC. After that, we go to one of the most popular photo galleries across the Balkans: The Saint Kaneos Church, set on a rocky hill, it’s a beautiful view of the land and the water. After lunch in a modern restaurant right next to the water, you can enjoy the free time. Enjoy the coffee in one of the many cafes, or walk around the shopping streets, there in the pedestrian area, where you can see the splendor of the 1100-year-old oak tree. Before the traditional dinner, visit the impressive Basilica of St. Sophia. One of the most important buildings in the country, which is nearly 1000 years old and is built on the foundations of existing churches. Within the Basilica you can find numerous frescoes, including one of the first paintings of the apostles in the world. After dinner, you can walk through the city or spend the rest of the day relaxing at the hotel.

Today, the program is a trip to Skopje. Along the way you make a stop in the city of Bitola. The city is considered a place of consulates, because since the Ottoman Empire there were many offices of representative states here. You will visit the National Museum, which is located in a former military academy from the 19th century. Among other things, the Albanian alphabet was created here in 1908. The program also includes a visit to the ancient ruins of "Heracleia Lyncestis", built in the 4th century BC and was founded by Philip II, the father of Alexander the Great. Before you take your place on the bus, take a stroll through the scenic area of the pedestrian. The mixture of French colonial style building and Ottoman architecture gives this path a very special flair. The journey continues through Pelagonia, the largest plain in North Macedonia. Slowly you reach the wine area and stop in the Tikves wine factory with the same name. Visit the underground labyrinth of the largest wine producer in North Macedonia, enjoy their selection and a comfortable lunch in this unique environment. Satisfied prepare for the last stage and arrive at your hotel**** in Skopje late in the afternoon. You have enough time to relax and explore the environment. Before dinner in a restaurant in the center of the city, take a short stroll across Macedonia Square and learn about the newest part of the capital. You can spend the evening in the center of Skopje.

Today you will explore the beautiful surroundings of Skopje. You will be driven by bus to the west Matka Canyon, where you will visit the idyllic St. Andrea Monastery. Then you start the boat tour on the Matka Lake, enjoy the view on the left and right steeply rising rock walls and dare a look in the more than 200 m long resp. deep Vrelo cave. After lunch in the natural environment of Lake Matka we head back to Skopje, where you can enjoy some free time. In the evening you will be picked up at the hotel and taken to the Macedonian Village Resort on the hills of Mount Vodno. The 16 houses of this village were built in the traditional architectural style of the 19th and 20th century, where today you can find different accommodations and restaurants. In this unique atmosphere you will enjoy a traditional North Macedonian dinner and will be driven back to the hotel afterwards.

After breakfast, start with a tour of the Old Town of Skopje. First the Skopje Castle, which is located on a hill above the capital. The individual parts of the wall date back to the 6th century, when the Justinian fortress was built. The view on this city is unique. The more you enter the Old Town, the more the Ottoman influences become visible. For example, Mosque Mustafa Pasha is one of the most important Ottoman monuments in the country. A visit to this mosque should not be missed. After the visit of the mosque you will come directly to the big bazaar. Under the Ottoman Empire, this area became the most important commercial and economic center of the city. The Ottoman and the remains of Byzantine architecture both are still visible in the midst of new constructions. You can enjoy the many showrooms of different garments, jewelery and antiquities, and see the local craftsmen in the process of producing their goods. The Old Town visit ends with lunch in a cozy traditional restaurant in the middle of the bazaar. You will again enjoy the liveliness and rush of people on the road before you get the bus and continue directly to the airport.

Air Prishtina has already completed Check-in for you. All you have to do is leave your luggage on the counter. 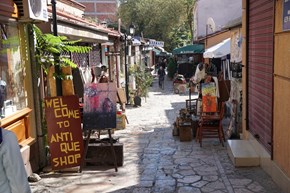 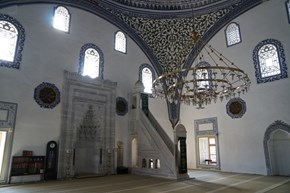 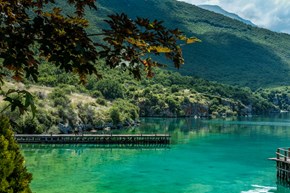 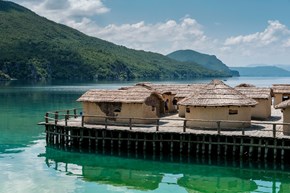 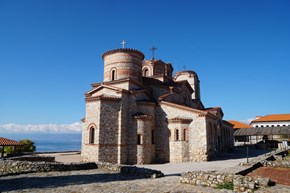 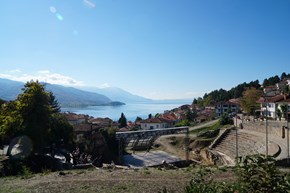 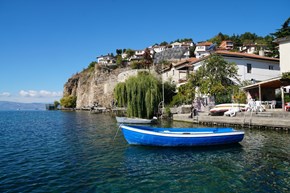 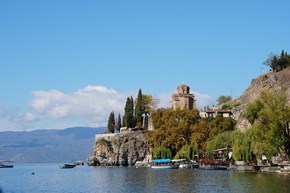 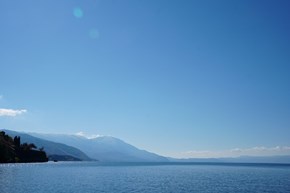 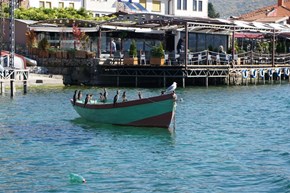 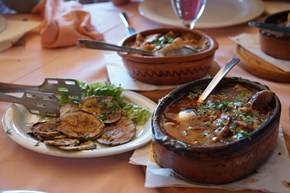 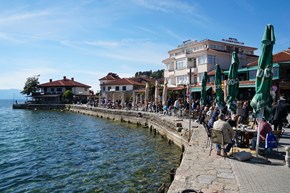 or write us an E-Mail on servicecenter@airprishtina.com